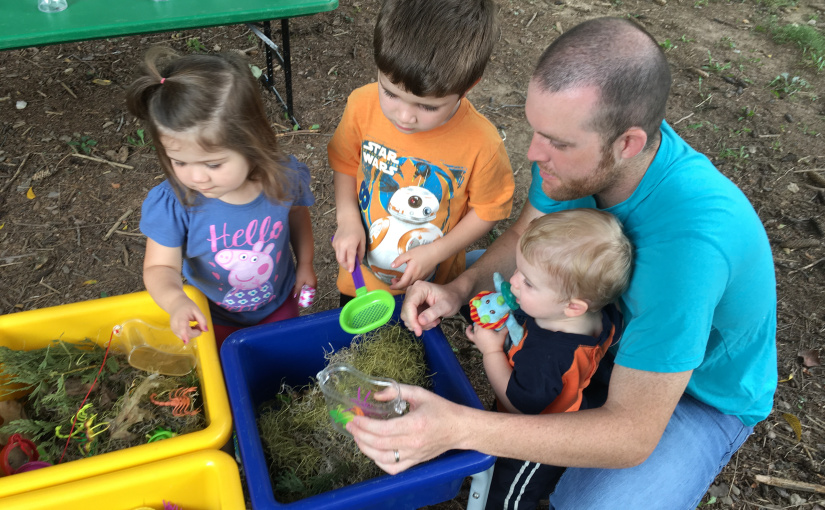 How do you know when your family is complete? Is it the warm feeling inside when you look around the room and see everyone piled on top of one another in a friendly game of “tackle daddy”? Is it seeing yourself in each child and knowing if you added another that your heart would literally explode because you are already loving at full capacity – and you know this world may not survive another mini-you? For me, it’s the simple reminder of the restless nights when the youngest wakes up every two or three hours, and this week Luke not only decided to resurrect that nighttime ritual, twice, but he confirmed that our family is totally, utterly, please-God complete.

Whoever coined the phrase “no one said life would be easy” was a smart cookie. They knew what they were talking about. Potentially. But I’m going to go out on a limb and venture to say that the person who was speculating on this game called life was doing so on a good not-so-good day. Maybe someone cut them off at a red light or the movie that they were dying to rent was sold out. Yeah, because if they were having a really bad day, I bet they would have adjusted their word choice to something more in line with “no one ever said that just getting through each minute wouldn’t be next to impossible.” Nope, I bet that phrase writer hadn’t experienced a day where they were forced to function on less than two hours of sleep and try to wrangle three kids to get ready for school. That was Cory and I two days ago.

Luke is teething. That’s probably all I need to say and anyone who has ever parented has a rush of memories that they have suppressed arise from deep within. Don’t let them escape, dear friends. Push them back into your dark memory abyss and lock them up for good. Remember your babies by their sweet smells and squishy cheeks. I wouldn’t wish memories of this level of exhaustion even upon an enemy. But, lucky us, we were reminded up close and personal when our typically good sleeper turned Jekyll/Hyde on us the last few nights, wide-eyed and deep lung screaming.

The whole family suffered. The boys share a room, so I wasn’t surprised when Eli relocated to the couch for reprieve. Lyndi woke up twice screaming from a nightmare, however, I bet the nightmare she woke up to was worse than what she woke up from. Now, I realize that our literal world wasn’t crumbling – thank goodness for Tylenol, and nighttime bottles, and the ability for cuddles and kisses to still fix almost everything. But for two already exhausted parents, the night about did us in. We wanted to throw in the towel – but with this venture, there’s no walking away. We’re in it, together.

Together. I realize that’s not a common word for many families when it comes to middle of the night kid experiences – or many experiences that involve kids to be honest. I didn’t comprehend how together we really were and how abnormal that was until we were blessed with the news of our pregnancy with Eli.

I always knew Cory would be a fabulous dad. I watched him shower his niece with love years before our kids were even a glimmer in our eyes. Years before we even dated, if I remember correctly. We lived a few doors down from each other in college and the day Kayli was born, he stopped me in the hall, with a grin stretched across his face, just to show off her picture. He was smitten; that girl stole his heart.

I always knew Cory would be an amazing and committed husband. He always put me first, and still does, no matter the occasion. His level of thoughtfulness is unparalleled, and he is genuinely happy just knowing I am happy.

But when we were pregnant with Eli, Cory put what I knew about him into action. He came to literally every doctor’s appointment. Even to just listen to the heartbeat, he was determined to not miss out on the experience and be there for me, and for our newest family member. And during my pregnancies with our daughter and youngest son, the number of times that he wasn’t able to make an appointment I could count just on one hand. He didn’t come because I asked him. He came because he was just as excited to be a parent as I was. He came because he cared about me, about our child, and wanted to experience as much of the pregnancy in whatever ways he could. That joy he experienced as an uncle for the first time, was magnified to an unprecedented level when he added the title of dad to his credentials.

And when our babies were born, he went up another notch. I remember co-workers, church friends, peers would approach me with caution when they found out I was a nursing mom, praising me for my commitment and showering me with compliments for not having bags under my eyes in the process. And with those supportive remarks always came the last line, something like “Aren’t men lucky? They get to sleep through it all!”

In the beginning those comments caught me off guard and I didn’t know how to respond. Yes, to some degree men are lucky. Their body’s aren’t forever changed after delivery. They don’t know what it’s like to have a “milk let down” when they hear a baby crying in the store that isn’t theirs, suddenly with a puddle on the floor because you forgot to wear nursing pads. I guess when you look at the elements of parenthood that literally a man cannot do, sure. I’ll give you that. But everything else, I just don’t relate.

You see, for literally all three of our children’s lives, Cory has been there for us every step of the way. I have never been alone during a night-time feeding. Every time, seriously, that the baby would wake, he would get them from their bed, change their diaper, and deliver the sweet package to me to feed. He’d stay up with me while I nursed only so he could take the baby and rock them back to sleep.

And his involvement didn’t stop there. When we get the dreaded call from school that one of the kids is sick, the pressure isn’t on me to halt my day and be mom-to-the-rescue. He is as willing as I am to swoop in and take them to the doctor. In fact, he will make it a priority to even be at a well check visit for our kids because he can’t wait to see where they are on the growth charts and ensure that they have a good bill of health.

If you’ve met Cory, this probably doesn’t surprise you. This level of love he shows me and our growing family he shows to everyone he meets. This isn’t meant to parade my husband around as man of the year, although to me, he totally deserves it! But I feel like it’s time I stand up and share the truth, and I know I’m not alone. The only way I make it through my day is because of him. Two nights ago when Luke was a screaming terror, I awoke to find that Cory was already rocking him back to sleep, comforting him even though exhaustion was knocking at his door.

It’s time to put a PSA out there for dads. Not all dads are careless, uninvolved, or missing. Just like each of us in life, you get the choice to show up and bring you’re A game. We all get that choice – dads and moms alike. Cory is proof that you don’t have to live up to the expectations the world sets for you, especially when they are set low. You can be a dad that not only plays on the floor with your kids but also makes sure their teeth are brushed and their clothes are washed. You can help with dinner and support your wife in her career. And I may take a gamble saying this, but I bet more dads are like Cory than we let on.

And I need him. How do I do it all, being a working mom of three, you may ask? One word – Cory. To all those dads who are in it with us, thank you for making life bearable. Thank you for holding us together and being as far in on this as we are. Thank you for breaking the mold and ignoring any stereotypes this world has tried to impress upon you. Thank you for being YOU. Because of you, Cory, I know nothing in life is easy, but it’s possible and bearable knowing I’m not in it alone.

PrevPreviousI love you too, Momma
NextYou Get To ChooseNext