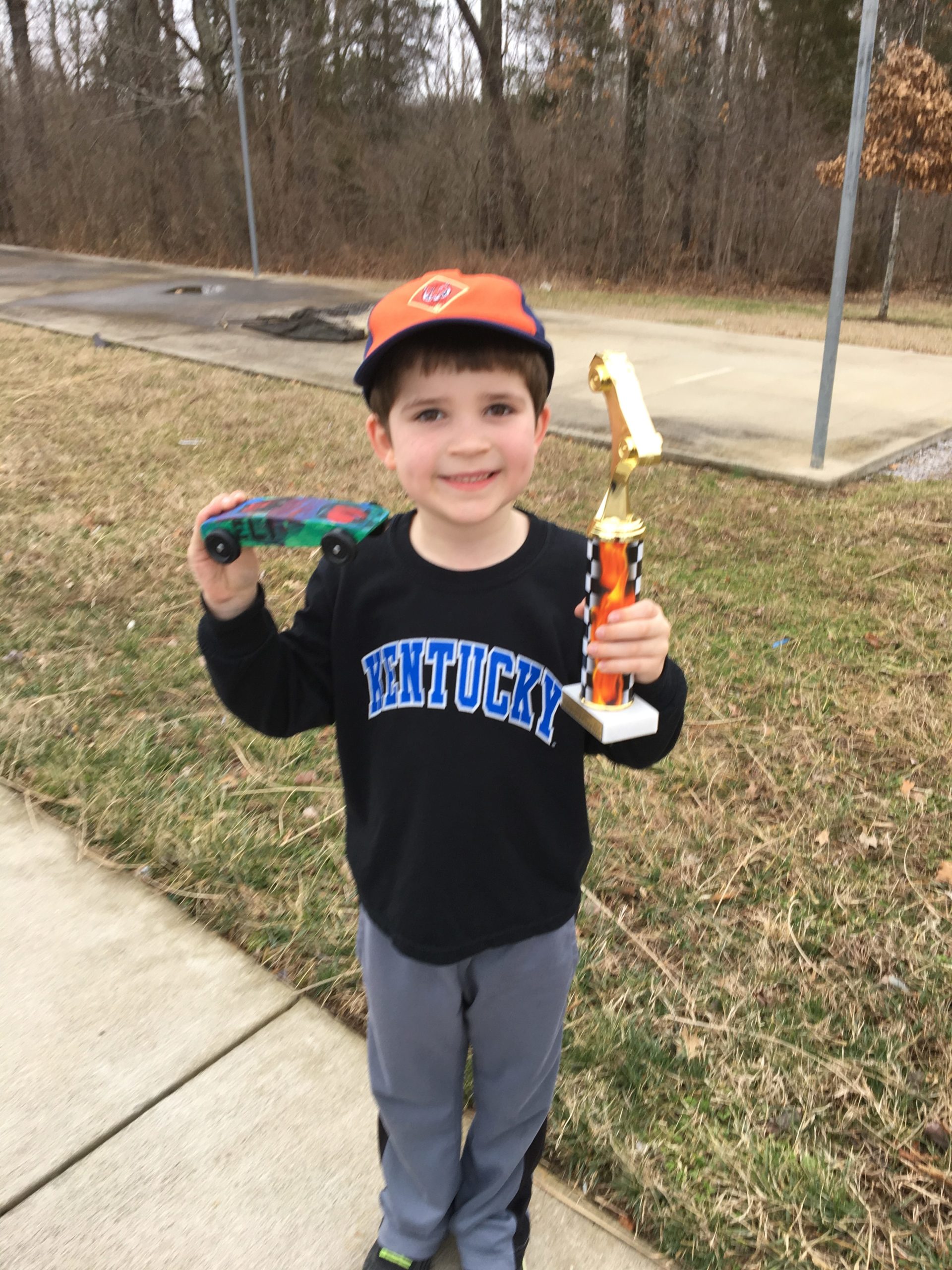 We hadn’t a clue what to do when we were gifted with the box. With the chaos of normal life in full swing, when we learned that this box didn’t require any action for several weeks, it found a home on top of other misfit toys, collecting dust with the best of them. That single box, however, brought an unexpected joy to my son one afternoon, demonstrating that no one should ever expect to predict an outcome, for that Saturday, the item nestled within that box proved to my family otherwise.

I pushed my oldest, Eli, to join Cub Scouts right after Cory and I made the crazy decision to buy a farm. As a woman terrified of bugs who married a man who wasn’t born with the “handy” bone, I knew one thing for sure… we needed to start our kids young in learning and respecting all things outdoors. He didn’t originally want to join his school’s pack, but after a little coaxing, he caved, and after the first meet he attended, he came home with more excitement for the hike he took than I could have ever expected.

He fell in love with being outside, thanks to the passion his pack leader expressed at each Cub Scout meeting. In a few short months, I just knew he would be ready for our family’s move to our hidden treasure in Kentucky… that is until he had a meltdown when he found a gnat in the house and was irrationally paranoid that it would make its way into his eye! (It didn’t help that I confirmed that could happen as one tried to make a home in mine when I wasn’t much older than he was.)

From my perspective, it was going to be the hikes, the camping adventures, and the other outdoor experiences that were destined to shape him most. But it wasn’t. Eli loves the hikes and can’t wait for the camping adventures he and his pack will have on our family farm. But what he is now most excited for is what occurs each year thanks to the item found in that single box.

The Pinewood Derby. I hadn’t a clue what it meant. Being from Kentucky, the term “derby” clued me in to a race, but the fact that I am an only child with no brother to prep me for what to expect, this momma was surprised when we finally opened the box to see its contents.

A block of wood. Two silver metal pieces. Four wheels. And a slew of instructions and rules to follow. Inside that box that we had semi-forgotten about was the ingredients required to make a custom-designed racecar that was destined to take part in one of the Cub Scouts’ most competitive long-standing traditions.

Each year, just when the winter season begins to dwindle and spring provides small glimpses of its arrival, Cub Scouts across the country gather within their troops to race their cars and let me assure you it’s not just any race. It’s a big one! I found this out when we packed up our simple “Picasso-inspired” hot mess for practice night, which took place only days before the intense competition.

The night before, Eli had painted the car that he unfortunately didn’t design himself. Of course, as it always tends to happen, the flu robbed him of more than his energy. It had stolen his ability to attend the “crash course” for Pinewood Derby newbies, but this family of inexperienced (and “handy-less” adults) couldn’t miss this once-a-year tutorial prep course, so Cory packed up our younger two kids and they made the trek to make the shell of the race car destined to take part in the annual race.

It was a simple design splashed with paint of various colors. It sported my son’s name and four not-so-shiny black wheels. His pride for his race car depleted the night of practice as he looked around, examining his friends’ pieces of art. “Toothless” from the awesome movie How to Train a Dragon inspired one car and Bumblebee, one of the all-time best Transformers, was another. Race cars that emulated Star Wars space craft and had aerodynamic designs flew down the race track that night of practice… those and Eli’s simple version.

As deflated as he was, so was Cory and I. We felt like we let him down. Our lack of experience didn’t behoove him one bit, and our lack of insights to how important this event was to the pack (and what we now know to Cub Scouts everywhere) set him up for failure. As a parent, that’s the last thing you dream of doing, but we had no other choice. No more boxes with racecar ingredients to start from scratch with were left so close to race day. Eli was stuck with our design, and to make matters worse, the car drove as lousy as it looked, coming in last nearly every race it took part in.

Cory and I opt to see times like these as teachable moments. On one hand, it gave us the chance to give our son a pep talk into how real life goes. Some days, you shoot for the win and other days, you pray for the booby prize. This time, we had no shot of either. On the other hand, this was a clear kick in the butt to us that when people tell you that an event is a big deal, you listen! Next year, we promised ourselves and Eli, that he would have a car he was proud of, and one that took into account a design for speed.

I had another meeting that Saturday afternoon, so Cory packed up all the kids (and the “Picasso” racecar) and walked into the school gym, which was filled with children screams and smells of potluck lunch. Corralling Eli’s siblings took Cory’s mind off of the embarrassment of Eli’s racecar, and collectively, our entire family agreed to just get through the day’s races.

Four races. Each car got to be a part of four heats, testing each of the different tracks along the way. That was all that our little racecar had to endure before we tossed it in the trash in hopes to forget about it. As a last-ditch effort prior to Eli’s race time, a friend’s dad cleaned the wheels and added some graphite, knowing that likely little could be done but Eli deserved a shot nonetheless.

Eli had no expectations… well, he did have the expectation for his car to come in last. He placed his car in the starting gate and meandered to the finish line with not a single pep in his step. He knew his fate. We had prepped him for it. He had accepted it. We all had. So when the racecars took off and within mere seconds the race concluded, Eli was as perplexed as the rest of his troop when his racecar passed the finish line first.

Everyone was sure it was a fluke, but his car had the same fate in the second heat… and the third… and the fourth. After each race, Eli’s eyes got larger and his smile got wider. He had a new energy that he had lacked before. His simple racecar – the one that just days before stolen his joy – decided to gift it back to him for out of his entire pack, Eli and his friend, who’s dad took the time to help prep his car’s wheels, both came in first place!

At my meeting I received a text from Cory, expecting a few photos of Eli with his friends at the Pinewood Derby, but I could never have prepared for a photo of him holding a trophy. I nearly fell out of my chair with unexpected laughs seeing that the racecar everyone had written off decided to tell a different story that day. It brought its A-game and, let me tell you, secured a spot in Eli’s memory box, which is a much cozier place to live than in the trash can.

The boy who walked in defeated walked out victorious. The boy who was expected to fail proved to never underestimate the underdog. The boy who had given up realized that hope is something to never give back.

That day wasn’t about the trophy, although Eli holds it with pride. That day wasn’t about the win, although it sure was serendipitous. That day, instead, was about expecting the unexpected. It was about trying anyway, even when you feel destined for failure. It was about believing that anything is possible and realizing that impossible is really just a wrong way of reading “I’m possible.”

That box… the one we neglected and didn’t give it the time it deserved… gifted my son with more than any block of wood, two silver metal pieces, and four wheels ever should. And, I’d venture to say, that while I still hope that Eli finds joy in the great outdoors, Cub Scouts is destined to teach him more than I’d ever expected with the Pinewood Derby being the beginning of us noticing that just because we don’t give something the time it deserves doesn’t mean that it won’t gift us with more than we do.

PrevPreviousWhy I Write
NextI Wanna See You Be BraveNext